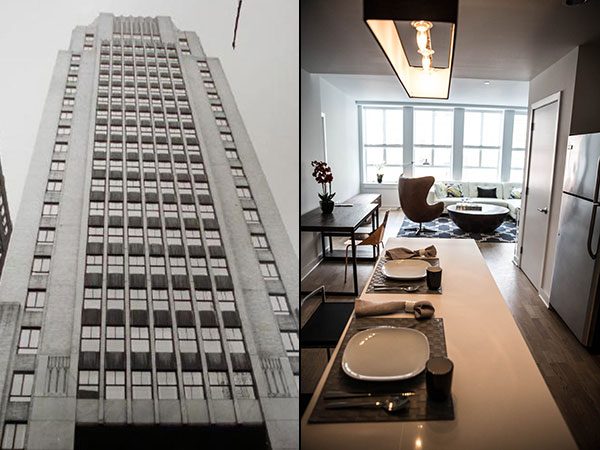 At left, an exterior photo of 1616 Walnut Street in its early days. Right, inside a 2-bedroom model apartment.

A brand new luxury high-rise in Center City is about to show Philadelphians a different way of life.

The ICON building, located at the historic address of 1616 Walnut Street, will open to its first tenants on April 1. While the 25-story art deco building boasts a mix of historic charm and modern amenities, it also adds something new to Philadelphia apartment living: features that promote health and well-being.

The building developers partnered with Delos, a New York-based company that specializes in what it calls Wellness Real Estate, which bases its design and construction on residents’ health. All units on the building’s ninth floor – and by request in the penthouses – will have 15 health-related features inside. Delos amenities can also be found in one of Saint Joseph’s University’s dorms.

Some health features include a Vitamin C shower infusion to neutralize chlorine and promote healthy hair and skin, lighting to promote better sleep and circadian rhythms, and anti-microbial coatings on surfaces to prevent spreading germs and bacteria.

Not only is ICON the first apartment building in Philadelphia to offer Delos’ features, it’s also the first rental building in the country of its kind.

“We wanted to create an environment that met the demands of today’s health conscious renters,” said Will Simpson of Federal Capital Partners, one of the building’s three investors. “[Today’s renters] want the newest and most innovative technologies without compromising the true luxury of living.”

Forty of the 206 apartments – including studios, 1, 2, and 3 bedrooms, and penthouses – have already been rented for the April 1 move-in date. The building still has finishing touches to be done, such as the gym and roof deck, but all is due to be completed by June 1.

Tenants will have access to a wellness floor that houses a massage room, yoga studio, cardio, weights, TRX and boxing. A nutritionist, who will do cooking demonstrations, will also be on site for tenants.

Residents will also benefit from a car and bike share program and an on-site pet groomer, among other perks.

While much of the the inside has been transformed into a sleek, modern building with the latest designs and appliances, much of its history is still visible.

“We did our best to honor and preserve the historical attributes of the building,” Simpson said.

The lobby looks almost identical to its 1920s style, as it has the same black brick and gray porcelain flooring, glass ceiling, chandeliers, and clock from when it was built. The elevators include the original doors and aluminum, which was worth a lot of money back when 1616 Walnut was constructed.

Each window in the building was replaced to match the original design – something that was required to maintain the historical facade.

Most recently used as offices, this is the first time 1616 Walnut Street has been a residential building. Simpson says the $50 million construction project took about a year, which was done in partnership among his firm, Alterra Property Group and Cross Properties.

Simpson, who invests in real estate across the mid-Atlantic region, says he was interested in taking on this project after finding success with another luxury apartment building nearby, The Arch.

“Based on that experience, it really made sense for us to identify another historic rehab,” he said. “The downtown metrics are excellent.”

The building also contains 23,000 square feet of retail space. So far, Santander Bank and the clothing store Theory have been approved to open up. Simpson says they’re currently working on other deals.

While ICON seems to be its own little city inside for tenants, when they walk outside they are in the heart of Center City next to dozens of shops and restaurants, as well as less than two blocks from Rittenhouse Square.

Simpson says his goal for the high-rise was to “implement a complex extensive redevelopment plan that would be great for us, the city of Philadelphia, and for the renters.”