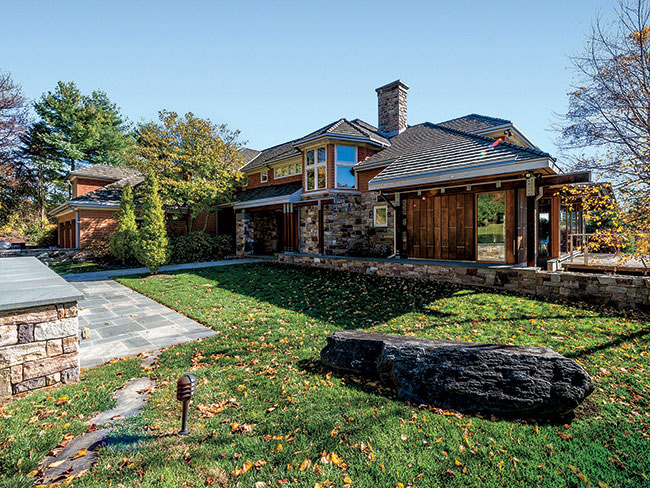 A new wing was designed to respect the rustic, vernacular nature of the existing house.

As Dan And Sarah Keating embark on their next chapter in life, the couple reflects on their rustic Main Line dream home.

A new wing was designed to respect the rustic, vernacular nature of the existing house.

Twenty years ago, Daniel Keating bought an enviable seven-acre property that overlooked the 100-acre Morris Arboretum in Gladwyne, tearing down the existing house and building a Colonial for his wife, Sarah, and their six children. But even then, he dreamed of an addition that reminded him of his trips out West. “I wanted a product that showed the talents of the craftsmen working on it,” says Keating, a third-generation builder and the owner of The Keating Companies, Philadelphia-based real estate developers best known for buildings like The Union League and The Phoenix.

He wanted this new wing to echo the work of architect Peter Bohlin, whose designs include The Barn at Fallingwater outside Pittsburgh and the Apple store on Fifth Avenue in New York. “He creates extraordinary buildings,” says Keating. “He has a passion for the vernacular that is rustic, highly artisanal in outlook.”

The swimming pool, designed by BLTA architects, predates the renovated house and became the redesign impetus for the whole structure.

Bob Henderson, master architect on staff at Keating, began to sketch plans. It would sit on a hill and feature a 20-by-40-foot pool, a guest suite, and a fireplace. After completing a 3-D sketch, he suggested it be fashioned in timber and steel.

The onus then fell to architect Alfred Dragani of Bohlin Cywinski Jackson to articulate a plan. Keating provided recycled wood he’d purchased from an old barn in Connecticut, and Dragani pieced it together, with sweeping glass expanses helping unite indoors and out. The end product looks as though it belongs in a luxe ski resort. “The world unfolds when you step onto the property,” Keating says. “It’s as if you are at a resort in Montana or Wyoming.”

The main entrance sets the tone for the western-themed interior.

Once the addition was complete, the Keatings had Dragani redo the exterior to match the style of the addition. Keating wanted a more open floor plan, so Dragani took down existing partitions to create space. “A palette of natural and recycled materials was used throughout for a rustic, yet modern character,” says Dragani. Roof-lines and windows were altered. The exterior would now seem much better connected to the outdoors. “The home now feels like a Frank Lloyd Wright house,” Henderson says. “It’s part of the land.”

Another unlikely meeting paired Keating with interior designer Floss Barber, who joined the expanding team. Barber and her firm did the interior finishes, walls, furnishings, and some art.

Keating emphasized that the home had to feel accessible. “We wanted to be able to enjoy all the rooms,” he jokes.

The dining room is an intimate space that recalls the old West.

Barber began with the dramatic entrance, which includes a monumental staircase. An oversize bronze bunny purchased at a gallery out West greets incoming visitors; in a humorous twist, both Dan and Sarah wanted to get it as a surprise gift for the other. Barber was forced to play the secret middleman—fielding surreptitious calls from both Dan and Sarah before convincing Dan not to buy it so Sarah could surprise him with it. “Their tastes are really that in sync,” Barber laughs.

The rugs are works of art as well—Barber had them custom made through the New Moon Mesa collection—and she found Spanish colonial antiques at Colonial Frontiers in Tucson.

The couple will downsize this fall when they move to The Phoenix to begin a new chapter in life, but they are leaving with happy memories. “The house has been fantastic,” says Keating. “We have raised our children here and used every room.” Eva McKendrick